The Foothills and Front Range regions of Alberta comprises a thin-skinned, foreland thrust-and-fold belt of the Canadian Rocky Mountains. Rocks of this region are composed of Mesoproterozoic to Mesozoic carbonate and clastic sedimentary rock. These rocks are deformed into imbricate fans along a basal detachment known as the Rocky Mountain Basal Decollement, a significant fault that thrusts these rocks over Paleoproterozoic and Archean crust of the North American continent.

The North Ram River flows east from Onion Lake into the Ram River. Our first stop is located at the mouth of a small canyon. At this location, the North Ram River thins from an alluvial gravel plain into a bedrock river, gouging a steep canyon into the exposed bedrock. The bedrock at this location is characterized predominantly by Mississipian dolomite which is prominent along the front range of the Canadian Rocky Mountains. The rocks reflect sediments deposited in a warm, shallow ocean.

​Although the Rocky Mountains are young in comparison to other North American mountain ranges, this canyon presents evidence of how erosion can quickly break down bedrock. Several joint sets are present in the rocks on both sides of the canyon. Along the main channel, the development of eddys scours concave indentations into the bedrock.
Stop 2 - Mount Hensley

Sediments of the Neoproterozoic Miette Group are exposed at the base of Mount Hensley. This is the oldest unit we will see on this expedition. The rocks are variably metamorphosed sediments composed of quartzite and basal conglomerate. On the left side of the outcrop, shale underlies the overlying quartzite and conglomerate along a disconformity. Along the disconformity it is possible to make out evidence of shearing with the shale losing evidence of its bedding and presenting fractured sections.

The rocks at this outcrop record a strike and dip of 150°/34° (Figure 2.1), further evidence of the deformation that drove up these originally horizontal sediments. 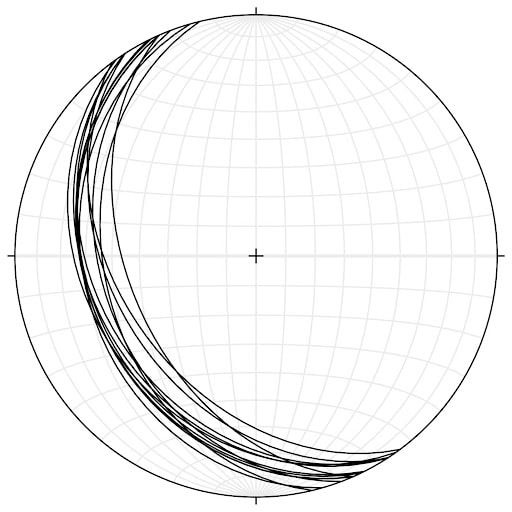 The outcrop at this stop exposes siltstone, carbon-rich shale, and sandstone of the Gladstone Formation. The formation belongs to the Lower Cretaceous Luscar Group. This outlook provides us an opportunity to view significant “small” scale folds in the Front Range of the Canadian Rocky Mountains. Towards the left side of the outcrop, a series of antiformal and synformal folds are located. The two folds are separated by a fault with the synformal recumbent fold thrust over the near-chevron fold to the right. The abundance varying folds is evident in structural measurements from the area (Figure 3.1).

The outcrop at Abraham Cove exposes the same rock units of the Gladestone Formation from stop 3. The folds in this outcrop share a similar strike and dip to the bedding at the previous outcrop. Towards the center of the outcrop a chevron fold sits beside an asymmetrical fold.

The history of Grande Cache is intrinsically tied to the mountains and foothills that surround this mining town. The following stops will explore the formations and structures that are associated with coal mining in the area. All outcrops in the next three stops include formations of the Lower Cretaceous Fort St. John Group.

​At victor lake, the small outcrop exposes the interbedded sandstone, siltstone, and shale of the Gates Formation. At this location, the sediments are situated on the southern limb of the Susa Creek anticline. This is evident from the orientation of the bedding which is nearly vertical. Towards the left of the outcrop, a dark band of coal is eroding much faster than the sandstone which flanks both sides of the seam.
Stop 6 - Susa Creek Anticline

This stop is located close to old open pit coal mine workings. At this stop, sandstone, siltstone, and carbon-shale of the Moosebar Formation is loosely folded and faulted. The differing effects of sediment deformation can be observed in the preferential fracturing of the resistant sandstones and siltstone. The weaker coal and shale instead shear, creating chaotic beds within individual layers. This outcrop lies along the southern limb of the Susa Creek Anticline.

​Two of the three coal rich seams in this outcrop exhibit characteristic coal splits. Splits are wedge-shaped coal layers that separate parts of a single coal seam into two. Splits arise from flood deposits in ancient channels. A closed-off adit is located in the third seam from the left - likely a relict of past coal mining and exploration in the area.
Stop 7 - Smoky River

The outcrop is located south of the Muskeg Thrust Fault and shows evidence of the folding that permeates the Grande Cache area. The sandstone, siltstone, and shale steeply dip to the south. At this stop, the coal content of the Gates Formation is easier to observe. Several coal seams are conformable to the bedding. The coal ranges in grade but pieces of bituminous coal can be found.