The Undergraduate Poster Session at the 2022 Virtual Symposium will be Thursday, April 7th.

It will be held in Tory 3-36 from 3:30-4:30pm. Please come by to learn from and congratulate our undergraduate researchers!

​Mount St. Helens (MSH) is the most active Cascade volcano and has regularly erupted large volumes of tephra over the last ~4000 years, distributing ash over hundreds to thousands of kilometres. MSH set P tephra were erupted ~3000-2500 cal yr BP and up to two tephra from this set were deposited as far as southern BC, with one found as a cryptotephra in eastern North America. However, complex proximal stratigraphy and lack of glass geochemistry of this set complicates distal correlations. This project aims to geochemically characterize several stratigraphic sections of the four main units of set P (oldest to youngest; Pm, Ps, Pu, Py) to: (1) unravel proximal stratigraphy for more thorough volcanological characterizations of each unit (e.g., plume height), and (2) confidently identify what unit(s) form the most distal deposits. Stratigraphic analyses confirm the four units comprising the set P suite to be generally differentiated as outlined by Mullineaux (1996), although geochemical data identified some mis-correlations that refine unit occurrences and thicknesses at key sites. Glass geochemical analyses show that while the four units can be differentiated, individual layers within the middle units (Ps, Pu) show a large overlap that complicates enumerating and mapping each individual layer within them. However, basal unit Pm and upper unit Py both comprise of a single layer that has unique geochemistry. These geochemical data were then used to identify the main distal unit as Py, although one site in southern BC appears to correlate to a layer mostly likely within Pu. 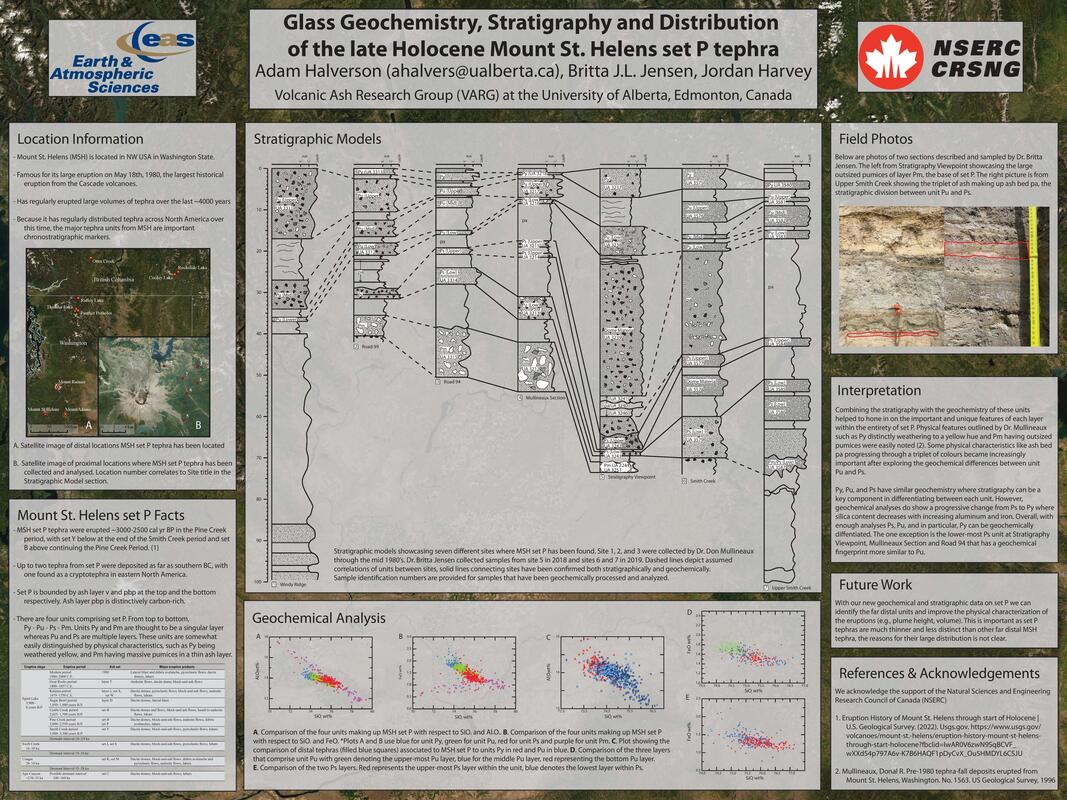 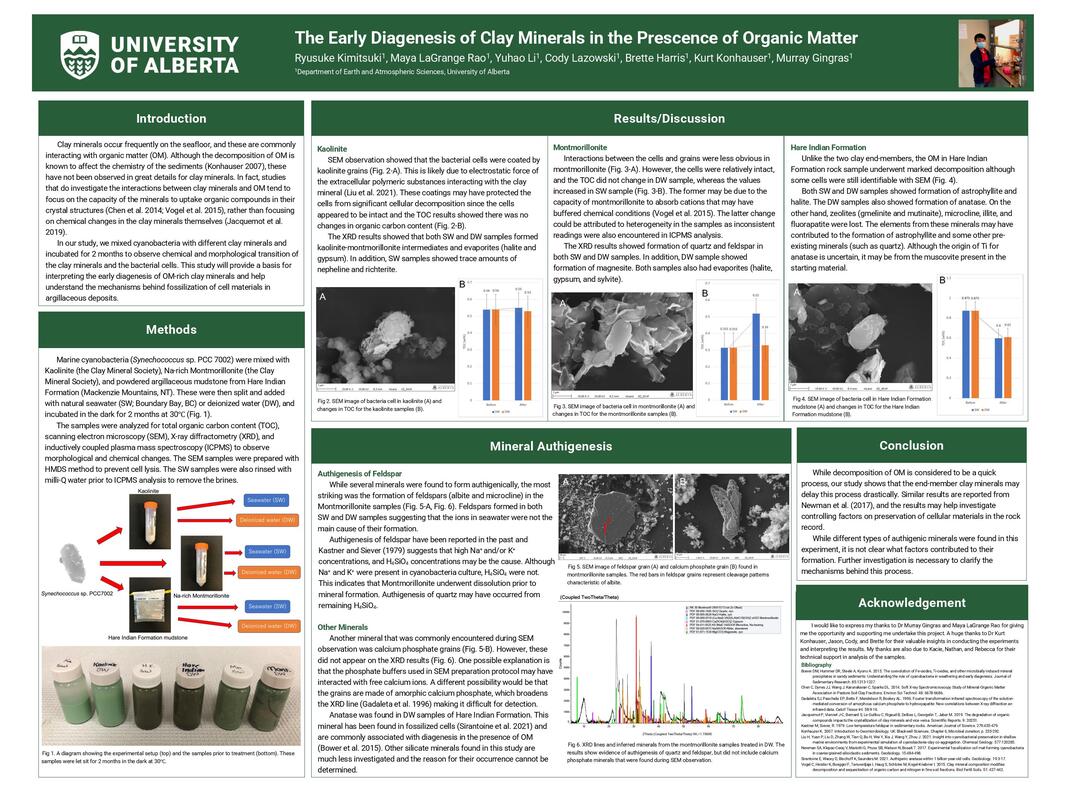 ​Samantha Nicol
​"Classification and Description of Brachiopod Repair Scars"
​
Repair scars are distinct traces produced when crushing predators fail an attack on shelled organisms such as molluscs and brachiopods, which subsequently regrow the damaged part of the shell. Repair scars have been observed on fossils throughout the Phanerozoic and are the primary means of quantifying crushing predation in the fossil record. These traces are recognized as predatory in origin because (a) regrowth and repair could only occur if the organism was alive at the time; (b) the scars are consistent in form among specimens, which is typical of predation; and (c) this type of damage has not been reproduced in taphonomic experiments. Despite how important scars are to predation research, many of the common scar patterns have not been formally described as ichnotaxa. I am adding two new ichnospecies to the ichnogenus Caedichnus and expanding the genus description to be more inclusive of crushing scars observed on brachiopods and molluscs.
​Gala Freeman Peters
​"Comparison of sclerobiont communities between three brachiopod host species from the Ordovician Fairview Fm." 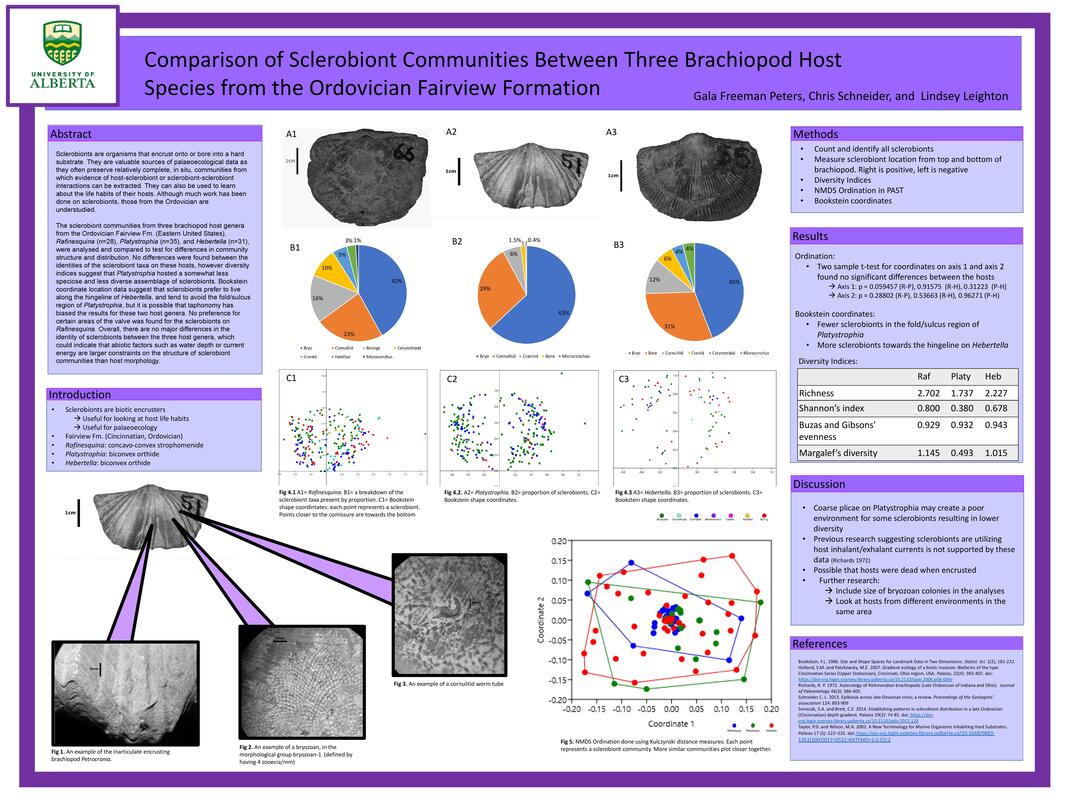 ​Elk Island National Park is a protected patch of forest located 35 km east of Edmonton,
containing primarily deciduous trees. The fragility of this forest is of great concern when
considering its northern location, in a region containing mostly boreal forests, where evergreens
are present. Using normalized difference vegetation index (NDVI) data collected by the
Moderate Resolution Imaging Spectroradiometer (MODIS) instruments on NASA’s Terra and
Aqua satellites, a phenological analysis of Elk Island National Park deciduous forest can be
completed. Time series of four 250m deciduous-covered cells were generated to determine the
length of season and the annual peak NDVI levels from 2005 to 2021. These two values are then
compared to historical weather data to find which meteorological parameter has a more
significant effect on plant health. The results demonstrated no trends in annual peaks of NDVI
values and season length. When comparing the seasonal variations to historical weather data,
namely temperature, relative humidity, and precipitation, a correlation between annual
precipitation and season length is present. It is also of note that all four cells indicated good plant
health each year. This lack of correlation between NDVI levels and meteorological factors and
the lack of trend in season length is an indication that the deciduous forest at Elk Island National
Park is generally stable, despite its northern location. 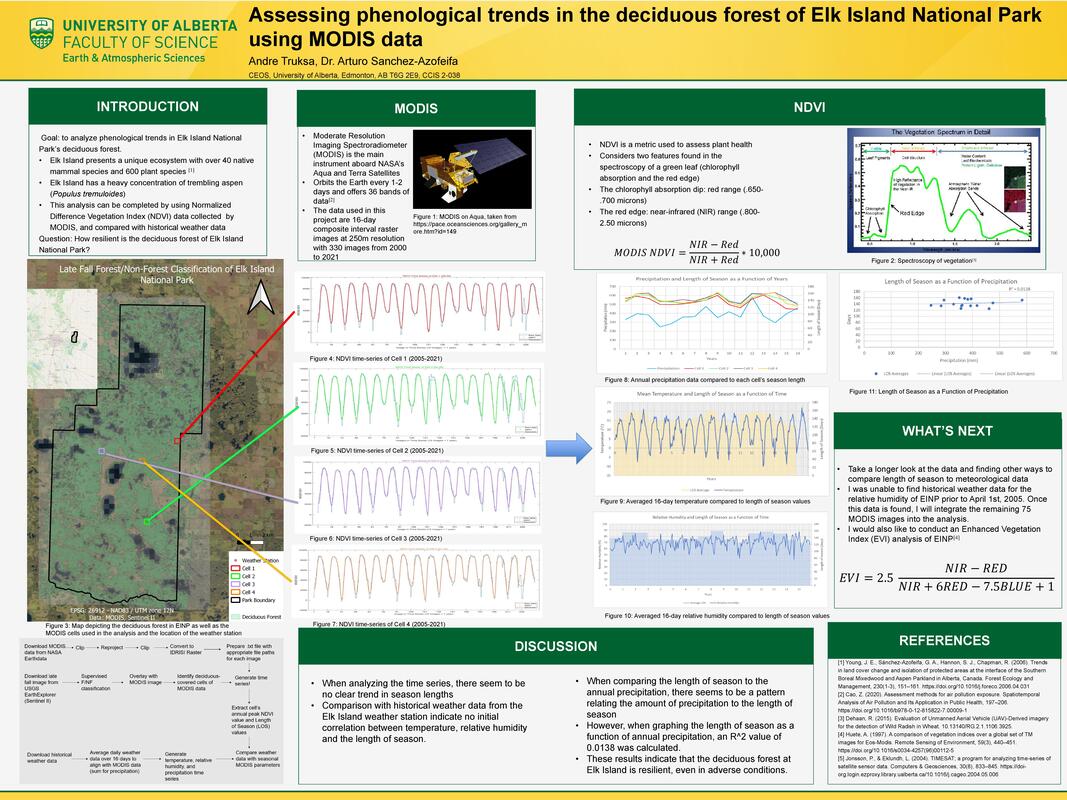