Symposium Keynote Speakers
​
​ATLAS is pleased to have two distinguished speakers at the 2022 symposium.
​
Wednesday, April 6th at 12pm Dr. Alan Robock will present Climatic and Humanitarian Impacts of Nuclear War
We will gather to watch Dr. Robock's virtual address in Tory 3-36. You can also join from your personal computer here.

The world as we know it could end any day as a result of an accidental nuclear war between the United States and Russia. The fires produced by attacks on cities and industrial areas would generate smoke that would blow around the world, persist for years, and block out sunlight, producing a nuclear winter. Because temperatures will plunge below freezing over land, crops would die and massive starvation could kill most of humanity. Even a nuclear war between new nuclear states, such as India and Pakistan, could produce climate change unprecedented in recorded human history and massive disruptions to the world’s food supply.

In this talk Dr. Robock will show climate and crop model simulations, as well as analogs that support this theory. He will discuss policy changes that can immediately lessen the chance of such scenarios happening and that can lead to the abolition of nuclear weapons. The myth of nuclear deterrence has allowed nuclear weapons to persist for too long. However, as a result of international negotiations pushed by civil society led by the International Campaign to Abolish Nuclear Weapons (ICAN), and referencing his work, the United Nations passed the Treaty on the Prohibition of Nuclear Weapons (TPNW) on July 7, 2017. On December 10, 2017, ICAN accepted the Nobel Peace Prize and the TPNW came into force on January 22, 2021.  He will discuss the prospects for humanity now pressuring the United States and the other eight nuclear nations to sign this treaty. 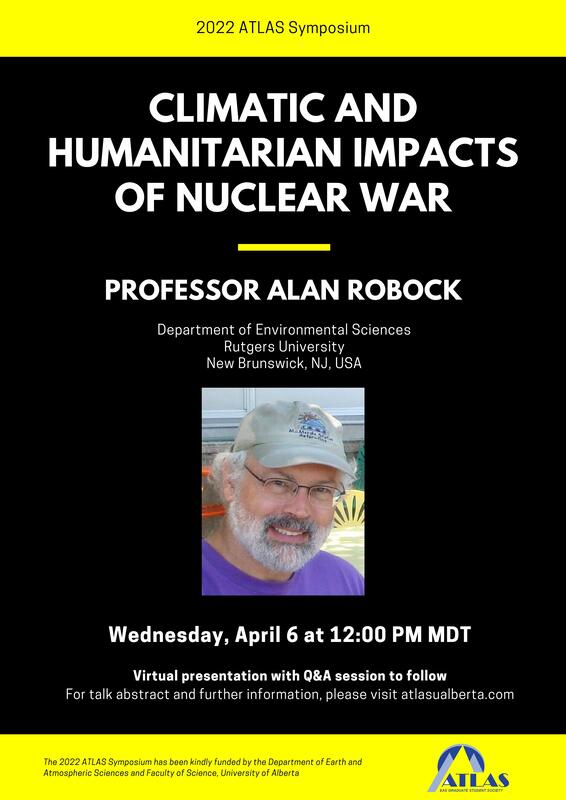 ​Unfortunately, due to unforeseen circumstances, this event has been cancelled.